Thank you for visiting!

Thank you for visiting!

Home to more than 60 million people, Burma is located in Southeast Asia, sharing borders with Thailand, Laos, China, India and Bangladesh. Now more commonly known as Myanmar, Burma is blessed with vast natural resources and a picturesque landscape, while enjoying a rich history of diverse ethnicities and cultures. Despite these gifts which the country has been endowed through the fortune of its geography, Burma is far from flourishing.

Like most of Southeast Asia, Burma was under
colonialist control in the 19th century. Under
the British, Burma experienced a wave of changes,
including the way ethnic groups were divided and
ruled. In the 1940s, Burmese nationalists
launched a concerted effort to fight for Burma’s
freedom. Led by General Aung San, Burma battled
and struggled for its independence. General Aung
San was assassinated in 1947 but his wish was
fulfilled as Burma finally gained its independence
in 1948.

Far from the peaceful and liberated life that many envisioned post-colonialist days to be, post-independence Burma underwent a period of internal strife arising from tensions and disputes among the different political, ethnic and social groups. In 1962, General Ne Win compounded the situation by leading a military coup, putting in place draconian policies that had catastrophic effects on the country. Burma closed its doors to the international community, its economy stagnated and the people of Burma suffered immensely.

There was an attempt at “democracy” in 1990,
where elections were held for the people to
elect a government. The hopes of the world for
a new Burma went up in smoke however, as the
military not only ignored the victory posted by
the National League of Democracy (NLD), but
also put the NLD’s leader, Daw Aung San Suu
Kyi under house arrest.

The situation in Burma still remains uncertain. Many continue to be deprived of basic necessities and the future seems bleak. For many years, the people of Burma have suffered in silence. In September 2007 however, the silence was lifted with monks taking the streets in protest.

How long will Burma’s plight go on?

Our visit to Thailand in Dec 07 brought us to Kwe Ka Baung Karen National School, where 221 children aged between 4-18 are presently enrolled. Situated within the centre of Mae Sot border town, Kwe Ka Baung’s exterior is modest, in the form of 3 dirty-looking shophouses. Classes from Kindergarten to Grade 1 through Grade 10 are conducted in the rooms and common areas of the buildings. 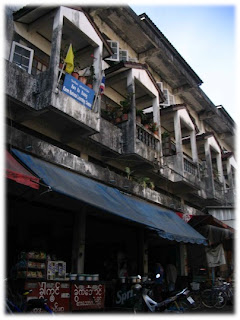 Kwe Ka Baung is not a typical school in Thailand, catering specially to children from Burma (Myanmar) whose families have left their home country in search of a better life elsewhere. Their backgrounds are modest to say the least, many belonging to families who had left Burma because of the dire and uncertain economic and political situation. Now living in Thailand and having to make do with an average daily household income of 100 baht (about S$4.50), many families do not see education as a priority, especially not when they have to pay for it.

Open to all children regardless of their background, religion or ethnicity, Kwe Ka Baung provides free education to these migrant children, with the desire of giving some hope to each child’s future.

In addition to sponsoring the children’s school fees, Kwe Ka Baung also provides free transportation to and from school each day.

Standing outside Kwe Ka Baung, we watched as the school pick-up approached to drop the children off at school. As they alighted one after another, we stared in amazement as the pick-up, which has a sitting capacity of 16, actually packed more than 40 children in its back compartment!

The pick-up, commonly known as the song tiaw, is the most common means of transport to school for the students. Every morning, the song tiaw makes 4-5 trips to ferry the children from their homes to Kwe Ka Baung. To ensure that every child gets to school on time, 40-50 students are squeezed into the back of the song tiaw on each trip, with the first starting at about 6.30am and the last at 8.30am.

To fit every one of the 40-50 students in the vehicle on each round, each child is only allowed a tiny space; some are seated on the 2 parallel benches, others seated on the laps of those on the benches, and the smaller ones will stand in the space between the 2 benches, each having to cling onto the handrails above their heads.

We were touched by the passion the founder and headmaster of the school, Pu Mahn Bala Sein had for the school and his children. His wish for each child is simple – that they be given an education, so that they can differentiate right from wrong and live a good and honest life in future.

One of the biggest challenge he faces is the need to continually seek funding from donors. Each month, Pu Bala Sein has to ensure that there is enough money to pay for the rental of the shophouses, the teachers’ wages, schoolbooks, lunches for the children and more.

For many years, the school pick-up has ferried the students of Kwe Ka Baung students to and from school. As the number of students increased, the song tiaw had to accommodate more children in its limited space. In recent years, the intensive usage of the song tiaw finally took its toll as the vehicle is now breaking down on a regular basis. For the past 2 years, the school has had to fork out 5000-10,000 baht (approx S$220-S$430) each month just to cover the repair costs.

How you can help

In light of this, we have set out to raise funds for Kwe Ka Baung, more specifically for a newer and bigger vehicle to ferry the students to school. Not only will this ensure that the children have a means of transportation to school each day, it will also save the school on repair and maintenance costs each month.

Though this is but a small gesture, our hope is to contribute in whatever way we can, to make the children’s school-going experience an even more comfortable and memorable one.


Kwe Ka Baung is the first migrant school in Mae Sot and was founded in 1990 by the present Headmaster, Pu Mahn Bala Sein. Mae Sot is a town on the west of Thailand, along the Thai-Burma (Myanmar) border. It is contiguous to Myawaddy town in Burma, which is part of the Karen State where many of Karen ethnicity reside.


As a result of the persistent political uncertainty and the dire economic situation in Burma, many Karen moved to the Thai towns along the border to seek refuge and employment opportunities. Pu Bala Sein is one of them as he was previously working in Burma but was forced to flee to Thailand in 1984 when fighting broke out between the Karen National Union (KNU) and the Burmese Army.


It was during this time that Pu Bala Sein first considered setting up a school for migrant children dawned were many Karen families in Mae Sot town. As a firm believer in the necessity for education, Pu Bala Sein wanted to provide the children with an opportunity to improve themselves, to learn about their history and to be developed into persons of dignity and integrity.


When Kwe Ka Baung first began, the school was housed in a Thai monastery with the blessings of a monk with whom Pu Bala Sein was acquainted. Funding for the school was one of the major challenges then. In the absence of NGOs in the early 90s, the school mainly depended on the kind donations from Karen who were working in Bangkok and other parts of Thailand. As the school expanded, it shifted to its present premises, a simple shophouse in the middle of Mae Sot town, in 1997. It was only in 2000 that NGOs were more active in Mae Sot and Kwe Ka Baung managed to obtain funding from international organisations.


Today, Kwe Ka Baung provides education to 221 students. Pu Bala Sein has plans to expand his school’s intake to give opportunities to even more migrant children. To realise this, he persists in seeking tirelessly for funds, from NGOs, independent donors or simply anyone with the heart for his cause. 
We would like to express our gratitude to each and everyone who has allowed us to share our cause with you, and for your generous donations to Kwe Ka Baung. From the bottom of our hearts, thank you!


Want to find out more or donate? Contact us!


We are happy to share our stories and would love to also learn more about others’ experiences in Mae Sot and along the borderlines, with the Karen community, and the like. If you would like to make a donation, find out more or share your experiences with us, please feel free to contact us at karenchildren@gmail.com


To visit Kwe Ka Baung Karen National School, their address in Mae Sot is as follows:

You can also learn more about Kwe Ka Baung School from http://www.kwb.5u.com